ISSAOS desk is open from now until 20:00: pass by just to say hi and grab your gadgets! 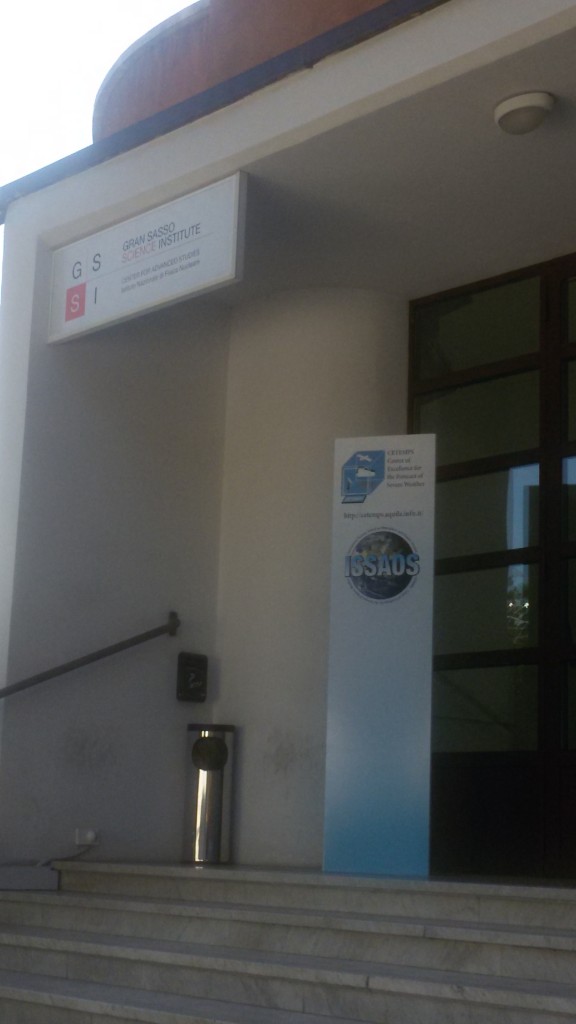 The final scientific and social program was defined and posted on the web:

as you might have heard from the news, Central Italy was hit by a series of earthquakes last night, two of which were strong enough to cause damage and life losses (the sad count is 37 at the moment).
The earthquakes were felt also in L’Aquila, but there are currently no reported damges to the structures or interruption of services (e.g. we are regularly in the office this morning). The place most affected in the sorrounding is the small village of Antrodoco, about 40 km on the west, where also some life losses are also unfortunately reported.
According to our information the situation is safe and there is no foreseen re-sheduling of the summer school. Moreover, L’Aquila is now regarded as one of the safest cities, because of the major earthquake that hit the place in 2009, and it is actually now getting ready to house the displaced people from nearby damaged towns.
With best wishes,
Gabriele
We updated the warm up instructions in preparation to the school, in particular:
1. Added instructions on how to set up your laptop for the data management session:
http://cetemps.aquila.infn.it/issaos/index.php/presentation/warm-up/data-management-practical/
2. Updated the “ssh -X” tutorial:
http://cetemps.aquila.infn.it/issaos/index.php/presentation/warm-up/x-server-and-ssh-on-windows/
Have fun!

the summer school is about to begin in 2 weeks! You will join a group of 45 participants from the five continents, hopefully in a friendly and productive environment.
We updated a few tips to getting started with the school.
First, setup of the graphical ssh connection on your laptop, in order to be able to perform the practical exercises:
http://cetemps.aquila.infn.it/issaos/index.php/presentation/warm-up/x-server-and-ssh-on-windows/
Second, a list of suggested online tutorials for a quick review of Linux shell commands & scripting and Fortran 90 programming:
http://cetemps.aquila.infn.it/issaos/index.php/presentation/warm-up/linux-shell-and-fortran-90/
Last, a short list of social events organized by ISSAOS and happening in the city during the school:
http://cetemps.aquila.infn.it/issaos/index.php/presentation/social-events/
Have a good reading, and see you all soon!