You may start looking at the Google Earth 3D tour (by Graziano Di Crescenzo), the location of the school is overflown at minute 0:55:

Below you find some information (far from complete, you will learn more during the city tour!) about the history of the city and its main monuments and places of interest.

The legend tells that L’Aquila (meaning “The Eagle”) was built in the Middle Age, by a federation of 99 founding villages joined by order of Emperor Frederick II, who needed a bulwark close to the boundary of the Vatican State. The name “L’Aquila” originates from the ancient Latin expression “Locus Acculum”, meaning “marshy place”: during the Jurassic era, in fact, the basin of L’Aquila was a lake.

The number of L’Aquila is the 99: it has 99 squares, each square hosting a church (99, but 60 remaining today) and a fountain, representing a symbol and testimony of the small village that cooperated in building it. The symbolism of the city is particularly enchained with that of Jerusalem: the number of L’Aquila is the 99 and the Jerusalem one is the 66. Similarly, the plant of L’Aquila resembles to that of Jerusalem… but reversed. L’Aquila’s fortune has changed many times during the Middle Ages, depending on the conflicts between Church and Kingdom of Naples. The city was completely destroyed by King Manfred in 1259, and , 7 years later, rebuilt by  Charles I d’Angiou. Then, thankfully to the patronage of Pope Celestine V, L’Aquila became one of the most important Italian cities, playing a very  important role in the political and economic life of the Empire. After the 16th century it got caught up in the coils of Spanish rule, deprived by its autonomy and relentlessly led to decline. At the beginning of the 18th century the city was destroyed by a  catastrophic earthquake.  The  final recovery started when Italy became a Republic.

Earthquakes mark the history of L’Aquila, a city built on the bed of an ancient lake, providing a soil structure that amplifies seismic waves. The city was struck and destroyed by earthquakes in 1315, 1349, 1452, 1501, 1646, 1703 and 2009. The earthquake of February 1703, which caused devastation across much of central Italy, largely destroyed the city and killed around 5,000 people. The 2009 L’Aquila Earthquake occurred during the night of the 6th April at 3:32 p.m. Villages in the valley just outside L’Aquila suffered the greatest damage while medieval mountain hill towns lying high above the valley suffered little damage. The magnitude of the seismic event has been 6.3 (Moment Magnitude Scale) and 309 people died. Before the earthquake L’Aquila was the 6th Italian art city, but now its cultural heritage was destroyed for the 80% and currently under repair. The amount of the damage is estimated to be 10 billion of €.

Santa Maria di Collemaggio is the most beautiful basilica (now Cathedral) in Abruzzo. This magnificent jewel can’t be described without referring to the life of Pope Celestine V. Pietro da Morrone was an old hermit, when, pinched for fasting and dressed of shag, became Pope. The papal throne had been vacant for 27 months, before his nomination. There are so many theories about his peculiar royalty, one of all, his business with Templars. He ordered the building of the Collemaggio Basilica before becoming Pope, when he was a poor hermit, in 1274 and when, according to the legend, he dreamt the  Virgin Mary telling him to build a church in her honor in that beautiful place. On the 28th August 1294 Pietro da Morrone was crowned in that same church, in L’Aquila, in front of two thousand of pilgrims, officials, aristocrats, and a young man, named Dante Alighieri. He announced the first Jubilee and the first Holy Door, built at the right side of the Basilica. The romanic-gothic façade was terminated  in the 16th century. It has a cross brocade in two colours, white and pink, and a central rosewindow (actually a double rosewindow) which is 5 meters of diameter. The main door, clearly gothic, has two similar anta elements, in which tabernacles with statues (now lost) are inserted. The sturdy tower-pulpit on the left side was originally meant to be a bell-tower. The plant of the church is a Latin cross, divided into three large naves. The paving, similar to the façade’s appearing, is the original one of the 14th century. At the bottom of the left nave is Celestine V’s mausoleum, realized by Girolamo da Vicenza in 1517. 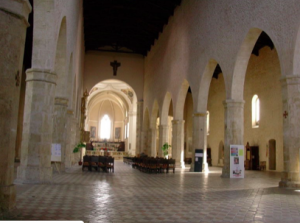 The Basilica collapsed from the transept to the back of the church. The first part of the partition wall between the nave and the aisle is collapsed too.  The mausoleum of Celestine the V was not damaged. The corpse of Celestine V is now positioned on the first column order basement at the beginning of the right nave. In 2017 the restoration of the church was completed and it is now visitable.

Piazza Duomo is the major square of L’Aquila, site of the town market which has been placed here for eight centuries. It has two of the most interesting churches: Santa Maria del Suffragio, with its pure baroque façade  and San Massimo (the Duomo), dedicated to San Massimo Martyr, the patron saint of L’Aquila, and Sant’Emidio, who is the preserver against earthquakes.

The Spanish fort of L’Aquila is the most beautiful Renaissance castle in Italy, but it has been also the most expensive one. It was thought to be a deterrent, and an expression  of the Spanish tyrannical power; it dominates the city and its cannons were pointed during night and day. This magnificent war machine is actually a waste, because it has never been used. In order to built it, Viceroy of Naples, Don Pedro of Toledo, taxed the people of L’Aquila so heavily that the city became very poor in the following 30 years. The fort was designed by the famous military architect don Pirro Aloisio Escrivà. He realized a huge building with four lance-shaped bastions (each pointing to a cardinal point) connected by massive walls, 5 meters wide. The drawbridge was replaced by a fixed one in 1700. A dry moat (23 meters wide an 14 deep) surrounding the fort prevented enemy artillery from attacking the foundations. The slanting walls were designed to deviate enemy’s fire and each bastion is an independent fort with its own tank of water. There a 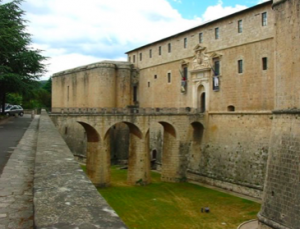 re also anti-mine corridors  with outlets to limit the damage in case of explosion. A whole hill was leveled to obtain enough stone to built the giant castle. It took 20 years to be finished. Today the Spanish fort doesn’t host anymore the National Museum of Abruzzo (it is now located near the 99 Fountains monument), but it has an auditorium and a very large public park surrounding it.

The Fort has never been damaged by an earthquake, but the 2009 one caused the collapsing of the third floor, which is an addition of the 19th century and represents a weak point of its structure. As it was built by the Spanish during their domination, now the Spain accepted to contribute to its repair, which is in progress.

The San Bernardino Basilica is a 16th century masterpiece, dedicated to San Bernardino from Siena, who died in L’Aquila in 1444. The mausoleum inside was realized by Silvestro dell’Aquila; 17th century paintings adorns the wooden ceiling of the central nave. The church hosts a splendid baroque organ, above the portal, by Bernardino Mosca. The impressive  façade is a typical renaissance work, containing elements of the Roman and Greek architecture. The dome of this church and its bell-tower had a very serious damage during the earthquake. The repair of the church was completed in 2017 and it is now visitable. 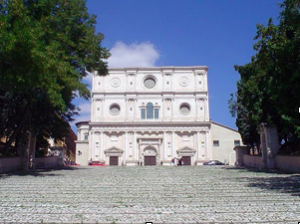